This is clearly worth the purchase and definitely an upgrade from its predecessor.

The tactical light or weapon light lets soldiers and law enforcement officers recognize a threat or target in total darkness. The light coming from the device can readily illuminate an area or be focused on a single spot and lets its user decide where to aim his or her weapon.

Curious of INFORCE’S WMLX? Then you are just in time for a review of the unit. This lightweight weapon light produces an output of 500 lumens and it is provided with a new user interface that operates significantly whether you are into momentary modes or prefer activation mode.

For more information about the unit, do read the rest of this article.

The WMLX is a light tactical illuminating unit which features a switch that lets it be employed in any spot on the rail of the weapon. Its integrated rail clamp is simple to use and it produces a grand total of 500 lumens of light output. It also offers a new optic to form the light that goes out of the LED.

The upgrade also included a streamlined switch interface. The device now includes a lever located on its side to let users adjust the means in which the switch operates. One can press on the lever backward for a momentary-only switch and the light will set off only while the user is dynamically pushing the switch.

Shift the lever forwards for a steady strobe functionality—this mode has been enhanced drastically with the exclusion of the low mode. Users can also access High and Strobe functions using this mode. The Strobe feature can be disengaged by hand, leaving users with the High mode.

Customers who are into the product appreciated that the unit is affordable, includes lockout features, is light and easy to attach. The simpler interface works excellently since it’s pretty minimal and the clutter that once went with it is gone, hence making the device more user-friendly. The reflector that the product was provided with is also something you have to focus on since it divides the light into 3 outlying rings.

The center is vivid and it presents a firm, steady throw. There is a slightly vivid ring all over that which illuminates a moderately broader spot. Lastly, it also presents a third, outmost ring that is quite broad and offers sufficient enough illumination to identify an individual in low-light settings.

While the light might look a tad odd once pointed at the wall due to the uniqueness of the rings, when put in use, it provides an impression of any other common light with a vivid hotspot and narrowing output in the direction of the beam’s fringes.

There were reports of customers who were not fond of the unit’s light draining properties, but in my case, I did not have any issue with it whatsoever. You can simply stock up on extra batteries to guarantee that your weapon will not run out of crucial light.

The unit is also built with polymer material so if you are a bit rough with the item, or it gets frequently dropped, you might see some damage on the unit.

The INFORCE WMLX 500 Multifunction weapon mounted light is clearly worth the purchase. The company made this product even better than its predecessor, the WML. The best qualities of the WML were maintained on the WMLX with many improvements.

Other than that, the interface was streamlined and made using the unit easier for most gun owners. 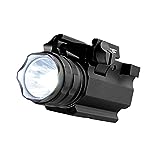 Some recommended products may use affiliate links. BestWeaponLights.com is a participant in the Amazon Services LLC Associates Program, an affiliate advertising program designed to provide a means for sites to earn advertising fees by advertising and linking to Amazon.com. Amazon and the Amazon logo are trademarks of Amazon.com, Inc or its affiliates.